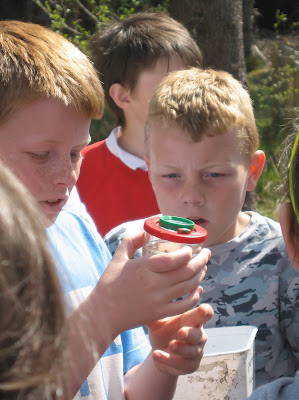 Last week I was working on 'The Written World'. This is a project run jointly by the Abriachan Forest Trust and Moniack Mhor writers' centre, which lie two miles apart on a hilltop above Loch Ness. children from Inverness-shire schools who visited for the day used their powers of observation, spades, nets, and pens and paper, in an exploration of the biodiversity of the Forest.
Suzanne Barr expertly conducted the forest stage, getting children to plant native trees, listen to goldcrests, find owl pellets and badger tracks, and briefly remove from the burn for inspection nymphs, larvae, tiny trout, tadpoles and frogs. Real spring weather arrived with us so we were treated to the song of the tiny willow warbler after its three week flight from Africa, orange-tipped butterflies in first flight to coincide with the first cuckoo flower, and on the last day, the hatching of a dragon fly. Such was the children's focus and enthusiasm that when I sat them down later with a pencil around the long table at Moniack Mhor, each brilliantly conjured a creature into a riddle and challenged everyone to guess. 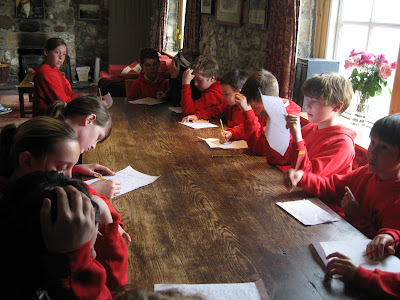 Moniack Mhor is in a glorious location with an unhurried atmosphere. It was the first time I'd stayed there when a residential course wasn't running, and I had it to myself each evening, high up with views to Ben Wyvis, the curlews burbling above me for company. Highly recommended for a writing retreat. I'll be back there in July to tutor on a fiction course with Jonathan Falla. 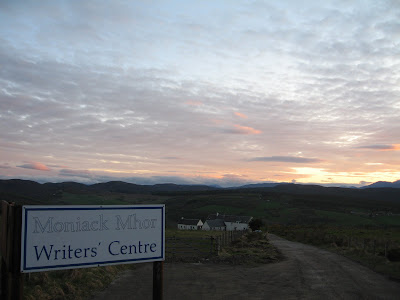 Posted by Linda Cracknell at 3:37 pm

Linda Cracknell
I'm a writer of fiction, creative non-fiction and radio drama. Recent books include a novel, Call of the Undertow, and non-fiction Doubling Back: ten paths trodden in memory. Both are grounded in particular landscapes - a big interest of mine. I teach and facilitate creative writing in a variety of settings at home and abroad. From July 2012- June 2016 I was writer in residence with the Sick Kids Friends Foundation in Edinburgh collaborating with illustrator Cate James - see All Write. I am currently writer-in-residence at George Watson's College - see THE DOOR. 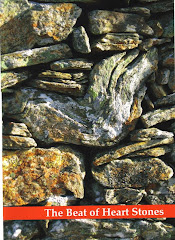 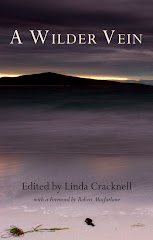 non-fiction anthology on wild places in Britain and Ireland (editor) 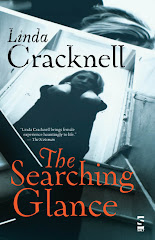 "...she writes as a painter in oils might paint, using a palette rich in both colour and texture...These are quiet yet passionate stories, subtle and striking in their effect." James Robertson 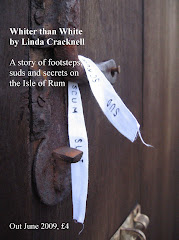 A pocket-sized story of footsteps, suds and secrets on the Isle of Rum